Before I start, I want to direct you to Kim’s blog post from last summer where she gives an excellent overview of the work archivists do when they process an artist’s collection- a good introduction to the work I am doing here. 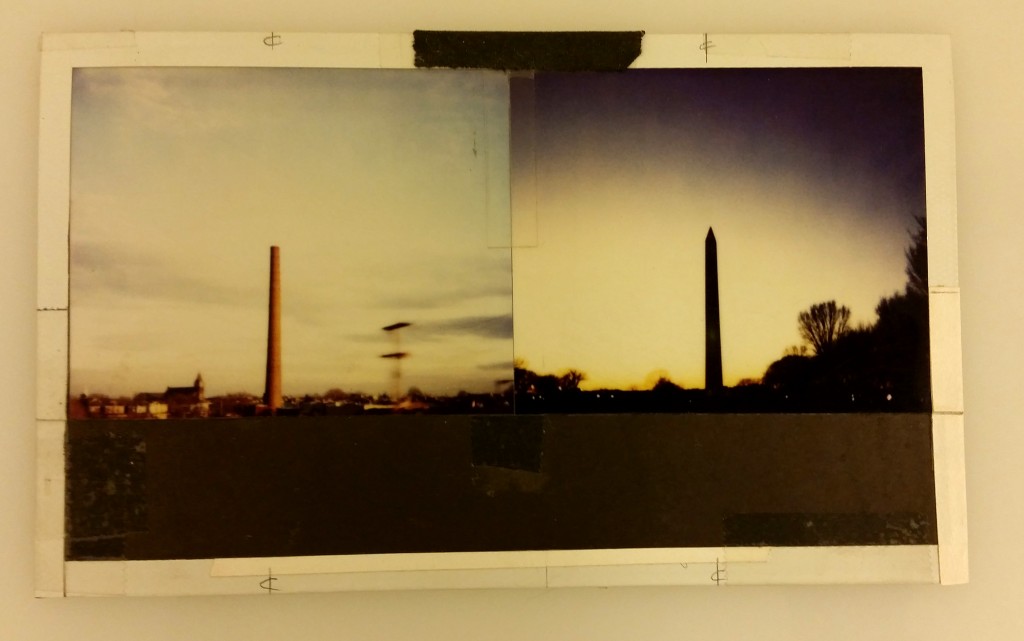 Two silhouettes, the one on the left a familiar sight to my colleagues and friends at home in Chapel Hill, the one on the right an everyday sight for my current colleagues and friends here in DC. The Lucky Strike factory tower in Durham, NC and the Washington Monument on the National Mall, photographed by Kimowan (Metchewais) McLain, the artist whose archive I am working on this summer at the Smithsonian National Museum of the American Indian Archive Center. These two Polaroids, taped together and masked with black construction paper by the artist, are an introduction to a recurring theme in Kimowan’s archive, a motif I want to play off of and trace throughout the collection as way to highlight the unique beauty and challenges found in an artist’s archives .

A brief introduction to Kimowan, a significant figure in contemporary Native art: First Nations Cree born in 1963, he spent most of his childhood and early adulthood on the Cold Lake First Nations reservation in Alberta. His art career began as an illustrator, cartoonist and later editor for the magazine Windspeaker. At age 29, he was diagnosed with a rare type of brain tumor (oligodendroglioma) and given a life expectancy of 10 to 11 years. He went on to complete his B.F.A. at the University of Alberta in 1996, and his M.F.A. at the University of New Mexico in 1999. He then moved to Chapel Hill, North Carolina  where he continued his career as an artist and also became a professor of Studio Art in the Art Department, UNC-Chapel Hill. While in Chapel Hill, he had solo exhibitions and participated in group exhibitions, including the well-received Loom (2005).  He passed away in 2011 at age 47 when the cancer returned. His wish was that his works and studio archives be gifted to the NMAI and they arrived here in 2015.

While processing his archive, I have come to know Kimowan well. Sifting through his life, following his trains of thought, the minutiae of his days; his character, vibrant personality, and sly sense of humor slowly emerged through the text and images. I struggled with finding a way to condense the beautiful complexity of this collection into one blog post, and decided to trace one of the themes I have found throughout his materials – his struggle with his smoking addiction. Several of the most impressive pieces now in the NMAI collection are from his series focused on the Lucky Strike factory and imagery: They are beautiful in their own right, but a look into his archive reveals the rich tapestry of thought and deliberation behind the creation of these paintings. I’ll begin with an excerpt from one of his sketchbooks: notebooks he filled with journal entries, sketches, grocery lists, loose photos, exhibition planning, and even a dead moth or two (taped in place). This entry from September 24, 1999 is Kimowan reflecting on the lawsuit just filed by the US Government against “Big Tobacco”, and his reaction to it:

“I’ve had the strangest reaction to this news. It has restored my fear – shaken my usual defense against my own smoking. […]There is a demon inside our bellies that eats smoke and steals life. God, what a beautiful creature it is. […]How black are my lungs? […] They were so defiant, they laughed at death; but they, like the Marlboro Man, will die too. Perhaps I will smoke in their honor. Cigarettes can be my death song, and I will laugh, fearlessly, as I sing. Then again, this could be just another item for my list (TOP TEN WAYS TO JUSTIFY MY SELF-DESTRUCTION). Shh. Not so loud.

We need a new hero for our myth. I suggest Marlboro Indian. Why not? We can work out the ramifications later. I wonder where I can get a cowboy hat? Maybe a machine that makes me breathe smoke, exhale fire like a dragon. I think, though, a cowboy hat will do the trick.” 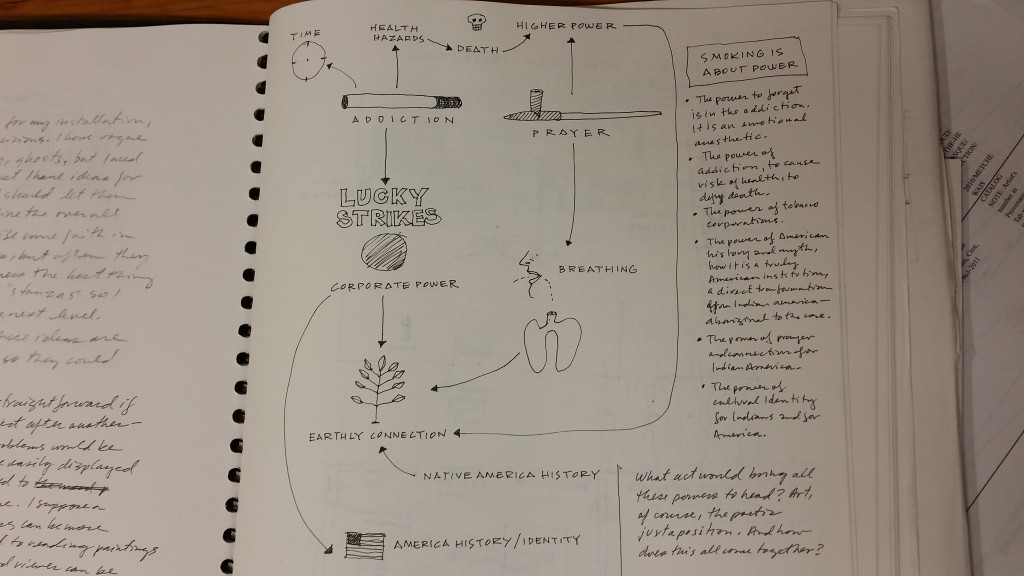 He followed this inspiration through to a series of Polaroids shot in his studio: You can see the specific leaves he decided on as lungs, the choice he made not to include any of the images of himself in front of the actual factory, his decision to capture the process of removing his shirt (the camera trigger visible in his right hand) for the Marlboro Indian series.

These Polaroids were an integral part of his artistic practice, and lived, neatly arranged alphabetically in these handmade boxes, until I rehoused them into Mylar sleeves and acid-free folders. 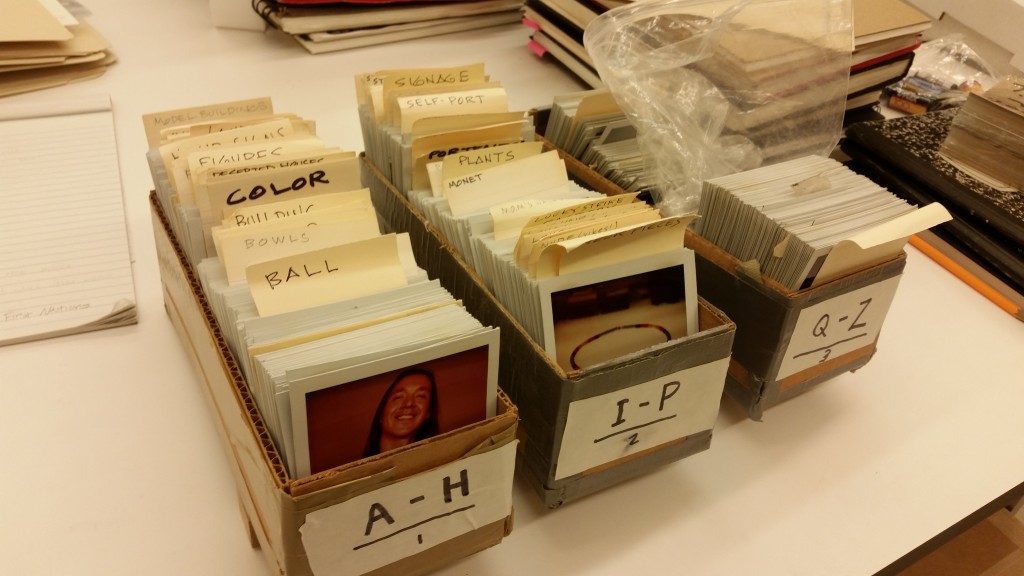 How will I indicate this original housing in the finding aid? There are many other questions. One of the trickiest, thorniest problems comes from Kimowan’s place as an artist working in both analog and digital mediums. He had a carefully curated web presence:  a YouTube channel, a Twitter account, and website featuring images and blog entries, to name a few. Of these, only the YouTube channel and Twitter account are currently accessible. His electronic records, presumably the blog posts, the website, and more, are currently housed on an external hard drive the Archives and I are having trouble accessing. I know Kimowan wrote extensively and very personally in his blog, and it is frustrating to have that (large) piece of the story missing right now.

However, the story we do have is a compelling one. As art historians, Kim notes in her post, it is easy for us to see the many exhibits and research projects this material offers, and as archivists to see the value in making these accessible. The story behind the Lucky Strike images is only one of many in the collection; his turbulent, bitter relationship with his step-father (resulting in the installation piece Reburial: Wrathful Architecture), the inspiration he found in travel and in other’s works, the beginnings of his magnum opus Cold Lake, these are only some of the threads here in the materials, waiting to be teased out and added to the tapestry of his oeuvre.

Working with this collection has brought into focus for me the real urgency behind the work we are doing with the Learning From Artists’ Archives initiative. The workshop discussions and interactions with artists have taught me that many artists are actively thinking about their legacy. There are institutions like the NMAI who are interested in collecting the archives of these contemporary artists. How then can the complexities of material, content, and intention found in a studio archive be effectively transferred from the artist to the institution ? That’s the question, the one we have been working on since the beginning of this project, thinking through in these blog posts, and the one we will continue to explore together at our upcoming workshop, symposium, and for many of us fellows, beyond that into our professional careers. I hope this peek into one artist’s archives has served to emphasize the importance of this work, for all of us.